To move UK Healing Crystals (the client) sales from Amazon to an alternative platform to allow for an increase in profit margin and at the same time help grow their business in a strategic and low-cost way.

After the initial call with the owner of UK Healing Crystals and the brief had been given, a plan was drawn up that was both financially achievable for the business and would deliver the desired results. It was agreed that the project would be broken up in to stages based on both time and available budget as the business had undergone a major change in structure and cashflow was key.

The plan was simple, build a WordPress site, with WooCommerce as this gave the most flexibility on a small budget and easy for the owner to edit and keep updated himself, plus great for simple SEO.

At the end of stage 1, the core structure of the site was handed over to the owner of the business for both training purposes and to add the products, imagery and also complete areas of the website that needed additional written content. By doing it in this way, it kept the financial commitment down and the site could be completed it in as little or as much time as was practical. Before it was made in to a live store, it was handed back for testing and then finally signed off.

The other element of stage 1 was relating to social media, of which they had Facebook in place, but no other channels. A strategy was put together for the client to follow to grow both organically and with paid media on Facebook and expanding out on to Instagram. Going beyond this at that time was not an option due to their time an budget commitments.

Something that had been put in place in the background was a newsletter sign up, in part from the eCommerce store and also a popup was to capture data, funnelled in to a simple automated thank you message.

When stage 1 was complete, sales started to trickle in slowly, but steadily, it meant they were not overwhelmed with additional processing and the business could get used to a new process.

Returning 8 weeks later, after the Christmas rush had died down, the client requested a further strategic plan for driving more traffic to the site and also “what other sales channels are available?”.

Stage 2, with such an open brief being that it was all about driving traffic and also opening up additional sales channels. First thing I did was put down a few strategic moves that could be undertaken using Facebook, including utilising local area groups, which would provide a platform for selling “b-stock” along with using Etsy to do the same. This has provided a steady flow of sales of items that may otherwise not been able to be sold. eBay had been considered but due to past issues with the platform the amount of work required to maintain it did not provide a good ROI in both time and money.

This was followed up by starting up email marketing. It had been another month now and the email audience list had grown a bit, it was time to capitalise on this, we ran a campaign for them and tracked the opens, clicks and conversions. It had a great open rate, strong click-throughs and conversions within the hour. They were over the moon. With some prompting they were also happy to do a resend, part of a general strategy that I would always advise doing. This yielded more conversions.

The email campaigns continued and have since had more conversions after each campaign and the audience has continued to grow steadily. 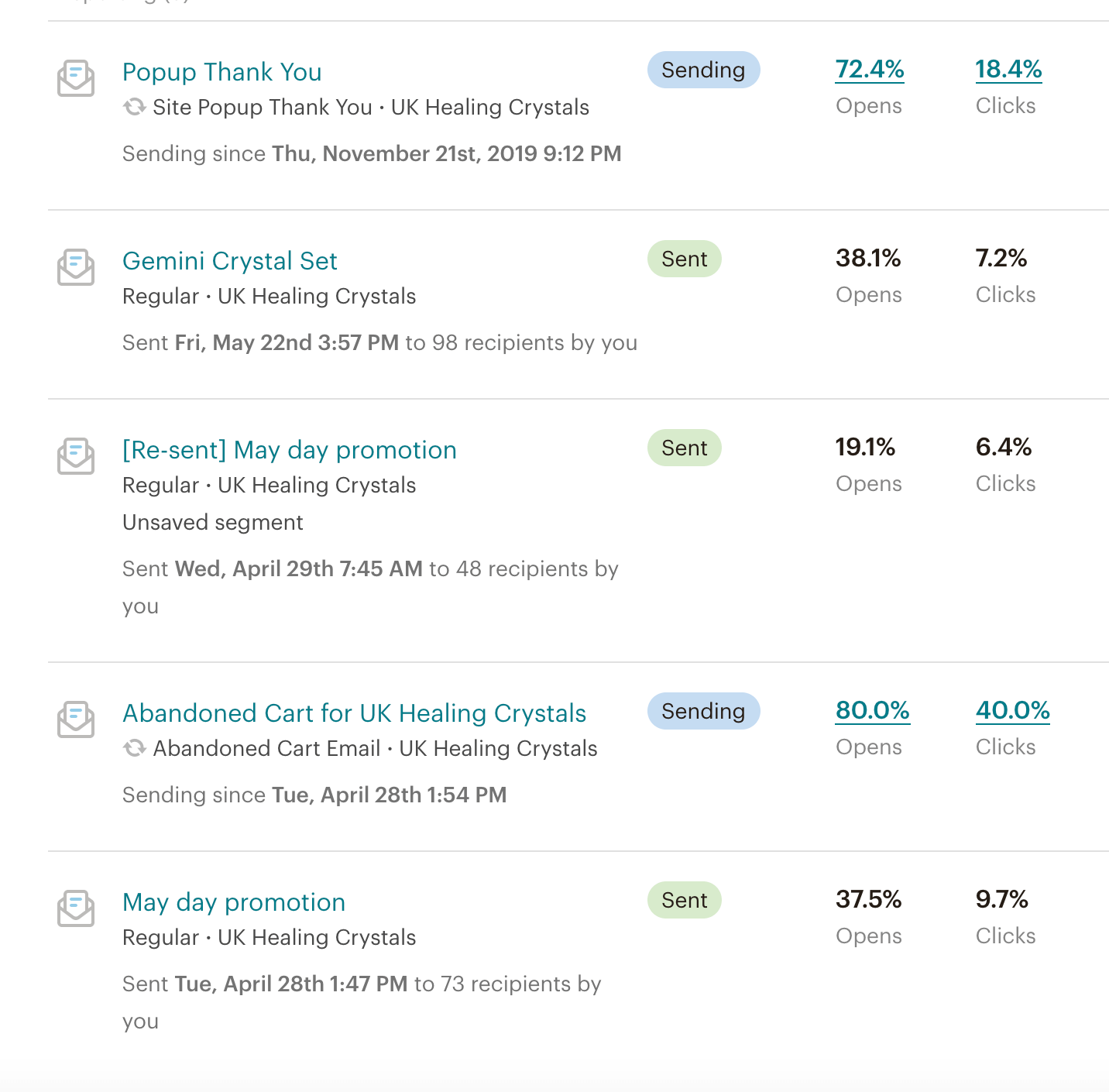 To drive further new traffic to the site, I turned to a paid media campaign, and created a strategy and setup the targeting on Google Ads so that they could follow it through and have periodic review as they didn’t have the budget to have a fully managed campaign for both Facebook and Google Ads. This has resulted in a strong increase in traffic to the site, the overall bounce rate is below 43%, traffic is up 64% quarter on quarter and sales through the website are growing by 50% month on month.

I got a call from the client one morning in late May (2020) all excited about their results.

“Phil, this has been our best month ever, we have beaten the target already and we still have a week of the month left! We are up on sales across all platforms, website sales are triple that of April, Etsy sales have grown again this month too. What can we do next to keep this going?” – D. Deadman – UK Healing Crystals

What can we do next, well that is stage 3.

We are working on that now, but it involves more work on social including user-generated content, sponsored posts, special offers, competitions, accelerating growth on the mailing list and expanding out on to Pinterest too.

Is your business just starting out? Have you been running for a while and just need a review and revamp of what you are doing?

Whether it is in the tech space or a niche b2c space, drop me a line and let’s discuss how we can improve your strategy and get you achieving more.

October 2020 update – Currently the site is still in growth, with a huge rise in sales with a tactical price drop, taking in to account the cost of sales on the other channels, the website was significantly more profitable, but the sales were creeping up, by reducing the price by 10% the sales have tripled with no increase in ad spend. The cost of sale for items on the website are still lower than the other channels, but the rising sales generated is proving a big success.

Any cookies that may not be particularly necessary for the website to function and is used specifically to collect user personal data via analytics, ads, other embedded contents are termed as non-necessary cookies. It is mandatory to procure user consent prior to running these cookies on your website.